Jurek Wybraniec maintains a dynamic multidisciplinary practice from his base in Western Australia. His work examines how aesthetics of popular culture and the everyday may be reinterpreted through a reductive approach, reassessing our use of language, materials and space.

Clear Black #1 to #3 is a group of occasional tables and stools layered with house paint placed on boxes made from recycled form ply. Resting on top are planes of reflective black acrylic and clear acrylic bars embedded with closed captions taken from the film, The Others. This work is part of an ongoing series that references cinema and the interaction between our aural and visual perceptions. It is the outcome of the artist’s investigation into the game played/what happens when objects and implied sounds are mixed up? How do they produce odd or amusing situations/ engagements?

For over three decades, Wybraniec has exhibited broadly in solo and group exhibitions. His work is represented extensively in both public and private collections, including the Art Gallery of Western Australia, the Museum of Contemporary Art Sydney, the National Gallery of Australia, Sydney and Daimler Chrysler Collection, Berlin.

Chris Hopewell is receptive to a mindset of self-discovery in his approach to painting which fosters free association in his mark making. The outcomes, closely packed and exultant in their form, are expressed with an uncoiling energy and mutable force. They are reductive in respect of their conceptual strategy and expansive in terms of their uncensored language. Through this dialogue with the traditions of painting practice, Hopewell represents the condition of the medium as an equal player in a world bound by the din of so many images.

Hopewell has a firm grasp of the relations between painting and experience. Instead of asking through his actions what may be the meanings emerging in his process, he draws our attention to how it is. The work draws you in and stays with you as a model for the experience of looking at paintings. His approach is underpinned by instinctive haptic drags and scrapes of paint across a field of sky blue, all of which are applied to a vertical canvas. The work is a record of his instinctive sensibilities; ways of being. Successive curls and ringlets of grey, black and white paint both repel and draw you deep into the spread of marks, to make your eye jump and switch back across the work. He winds the audience in and pushes back with equal intensity magnifying ideas about time and gravity. The space in Hopewell’s paintings cannot be pinned down in one location.

Hopewell’s final seduction in this process, involves a ‘black pour’ of resin applied across the horizontal surface of each work. The heavy film is iridescent and tar-like, invariably taking its own path, sitting precariously on the surface and crisscrossing the matrix of painted forms beneath. Hopewell’s ascetic diet of ‘pours’ are suggestive of the movement of the moon’s silhouette across the sun in a solar eclipse. The apparent shadow play conjures a screen of multiple windows upon the virtuosity in the work. The black rivulets also emit a serene stillness and silence while reflecting the wider presence of the world and movement of the spectator. The painting may well only exist or be completed more fully without an audience or artist present. The paintings have a life of their own. 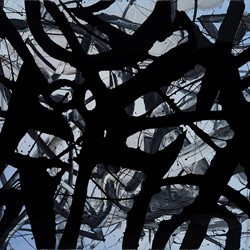