'It is not difficult to appreciate the technical qualities of the paintings in this new body of works by Ron Nyisztor. Meticulously rendered, the objects depicted confront the viewer as though in a mug shot, dead pan and still. The neutral backgrounds reinforce this effect, suggesting an indefinite space, neither close nor distant. The play of light is powerful, revealing the objects and the air that surrounds them. The centred subject of each painting is familiar; glass timers, a candle, gems, containers and other found objects.

Delving more deeply into these seemingly innocuous representations reveals deeper layers.These disparate items have a Morandi like significance to the artist, having been in his possession over many years, serving as reminders of people, places and experiences. The objects have become enmeshed into his daily life and serve as vehicles for metaphysical explorations. The placement of these items into a painting assists in our perception of them as things, disassociated from their functional role, and how we might name and categorise them, as though seeing them for the first time.

This initial confrontation with a strange object is what Nyisztor is aiming for, the immediacy of perception, before time dissolves the initial shock of recognition and the things that surround us disappear into familiarity and invisibility. It is inevitable that this will occur, as to have this encounter on a constant basis would make life unbearably intense...yet it is important to be reminded of the fundamental experience of reality.

It is part of Nyisztor's modus operandi that he devises titles in advance of the artwork, laying the conceptual groundwork that accompanies each painting, but less a title more like a script for the artwork to act out. They could also be minimal two word poems, expanding into other meanings that exist alongside the mute renderings in oil paint on canvas.

The title Semi Precious raises more questions. What part is precious and what part is not? By what criteria do we value objects? Is this value arbitrary or based on some material or monetary worth? It is this idea of value that is at the core of this exhibition. How do we measure the value of things and their meanings, and our interaction with the world?' 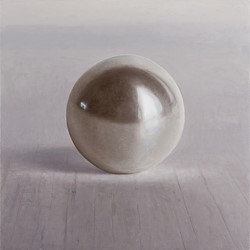