Nicholas Folland // Outside In

Nicholas Folland, It Could Have Been Me ..., 2019, chandelier, refrigeration unit, 12V lighting and ceiling rose, dimensions variable

Nicholas Folland reinterprets the ordinary and banal. Utilising common domestic materials, repurposed furniture, natural fibres, taxidermy and ice, Nicholas manifests fables of historical reference, exposing cultural differences and tapping into our individual and accumulated sense of identity. By marrying his sculptures with natural elements (ice and heat) he gives agency to these objects, offering an opportunity for continued action and reflection. He is captivated by his own family’s historical journey to Australia and references the extreme climates and sometimes ill-fated journeys of explorers.

'Ideas associated with shifting from one state to another lie at the heart of Nicholas Folland’s electrically powered chandelier works. Rigged with refrigerator elements, the works generate a bulbous form of ice on the main stem of the lit chandelier throughout the duration of the exhibition. The continual liquid/gas/solid morphing implicit in these works is not the only shift signalled here – Folland’s chandeliers also allude to the transformation from low art into high art and back. The lighting fixtures used in these works were originally installed in suburban Adelaide homes, far from the European palaces with which they can be historically linked. When transposed to a white cube gallery space, the once kitsch illusions of grandeur are presented as fine art. The shifts from one state to another that underscore Folland’s work do not seem linear. The kitsch ancestry of materials is retained in his sculptures suggesting that the states of high and low art exist at the same time within these objects. These works can be symbolically connected with the idea of the supernatural – light and variations in temperature have often been linked with the presence of ghostly spirits.'
Dr David Sequeira, Director, Margaret Lawrence Gallery 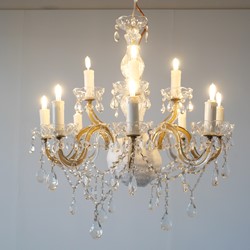