This much-anticipated exhibition extends the artist's interest in the aesthetics of popular culture. It is part of an ongoing series that references cinema and its proxy to the everyday and the interaction between our aural and visual perceptions.

Jurek Wybraniec has been a major contributor to exhibitions, commissions and academia since the 1980s. The Art Gallery of Western Australia exhibited his work in WA Focus in 2016, alongside fellow artists Alex Spremberg and Trevor Richards. He was the recipient of the 2015 Bankwest Art Prize and the 2016 Albany Art Prize, which includes a month-long residency in Albany this April.

This work is the outcome of my investigation into the game played/what happens/when objects and implied sounds are mixed up? How do they produce odd or amusing situations/engagements?

Establishing Shots is a series of postcards presented in a cinemascope format (2.35:1). Postcards were chosen on the basis of the commonplaceness of the image and contained/extended by cloth tape and mounted on ink washed paper. The captions are taken from random films including Pulp Fiction and Ripley’s Game.

Clear Black #1 to #4 is a group of occasional tables and stools layered with house paint placed on boxes made from recycled form ply; resting on top are planes of reflective black acrylic and clear acrylic bars embedded with closed captions taken from the film, The Others.

In his book Reading Sounds, Sean Zdenek (2015, 2), writes; “Reading Sound develops a rhetorical sensitivity to the interaction among sounds, captions, contexts, constraints, writers and readers”; a description that resonates with my investigation of the relationships between closed captions, objects, materials and spatial interventions. 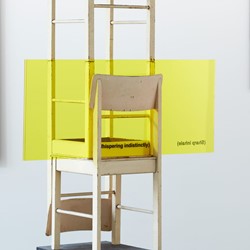 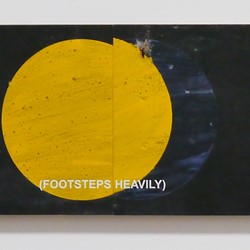 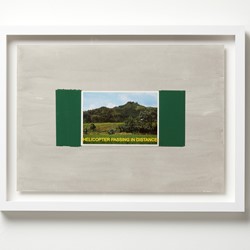