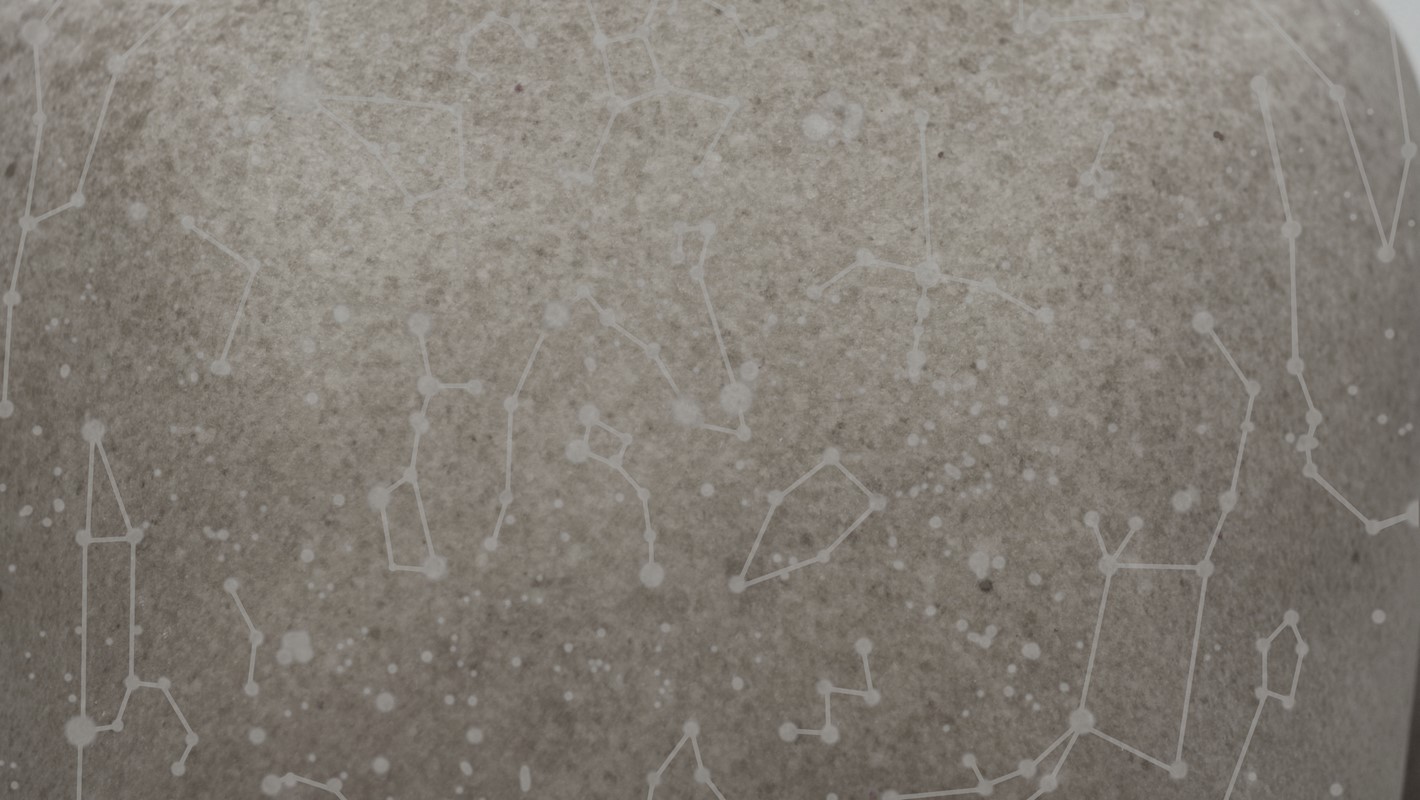 We organic beings who call ourselves humans are made of the same stuff as the stars. (Harlow Shapley, 1929)

This show demands big themes, so lets dive straight in; we are all star stuff – this was reiterated famously by Carl Sagan and it now seems counter intuitive to suggest otherwise – we live in the universe so ipso facto, we need to be made of the same stuff. Not that long ago this may have been impertinent to suggest but now we believe that dying suns make the elements – these in turn conspire to work in particular formations to create unique and unbelievably beautiful galaxies.

New stars are born from such beds and rocks circulate them. But as stars create elements they also create energy and at least in the case of Cosmology, it may be useful to put forward that with this crystallisation and evolution of elements, energy and matter into consciousness comes also unique concepts like emotions, memory and the realisation (or relative nature) of time.

We are made from dead stars and it seems only realistic that we pine for that loss. The nature of the continuing journey from our elemental birthplace accordingly manifests separation, a grief for distance that accords to the lament of time passing. It is at once the paradoxical nature of mourning and the awareness of life. I think the seemingly elementary nature of the physicalization of this truth makes for the embedded melancholic nature of life.1

And so I view the wonder of all connection through Penny Bovell’s and Tony Nathan’s work, not just that cosmic nuance that places two creative minds with similar interests in a microcosm of the same space-time continuum, but the type that manifests its own simultaneous transcendental passing. As we look further and further back into the universe it is worth considering the lens as a portal to the continuous fortuitous nature (or to us now the logical historical eventuation) of such collisions. This type of collision of entities should never and does not cease to amaze me, such is the profundity of the universe, to continually collide and materialize ideas, creating potentiality through such willing vessels as us (its children).

The lament I feel in these images, of elemental rocks, of dark shapes masquerading as passing objects in the night sky, of backs mapped as constellations, is an uplifting sensation of the type one feels when floating out into the universe when you enter dreaming; it is a loss but also a sense of return. The star stuff that makes us, with its inherent spirals that regulate the galaxies and elements that circulate through us – achingly, with such sadness, wants for its birthplace, so much so that it charts its release. The melancholia that seeds our cells drifts through the nexus of creative dreaming that permeates these artists’ works and wanders on to leave our thoughts whistling in images, phrases and lost words.

I feel poetic today but then I feel lament because I know that the connections that exist in Cosmology are continually colliding in our lives, our-selves and our memories as they push back to the fold. As time itself aches for answers the cosmos will continue to (thankfully) proffer such artists as Penny and Tony because time, as the only entity that truly manifests life, wants to be curled up in the arms of poets and visionaries; spending itself with those that contemplate the infinite, the melancholic, the beauty of endlessness as the crucibles of eternal return. In dark matter is the light of potential, in the gaps between elements is love and in the night sky is the spectre of fluidity, wonderment and a reminder of the delights of who we are and what we’re capable of.

We are stardust, we are golden, and we’ve got to get ourselves back to the gar-ar-den… (Joni Mitchell)

1 Melancholia (sadness/ to mourn), as Lars von Trier so wonderfully allegorized in the movie of the same name, is seemingly subordinate to the stars, the movement of the galaxies and lies at the heart of subsistence on this planet. I see it in this sense as a lament for loss and is a mourning for the passing of time but I also think it rises from a sense of wonder – one seems intertwined with the other.

Dr Ric Spencer is an artist, a writer and is Curator at Fremantle Arts Centre.